Kiara Advani rose to fame post the success of her 2019 film ‘Kabir Singh‘ which also starred Shahid Kapoor. Post that, the actress seen in Raj Mehta’s ‘Good Newwz’ with Kareena Kapoor Khan, Akshay Kumar and Diljit Dosanjh. Recently, she took to her Instagram handle to wish her co-star Ram Charan.

The actress shared a still featuring birthday boy. She captioned the post as, ”Happpppppy Birthdayyyy @alwaysramcharan”. The actors worked together in Vinaya Vidheya Rama and have been friends since then. Last year, during Kiara’s birthday, Kiara decided to catch up with Ram Charan over dinner and was seen while making their way out of a popular restaurant in Mumbai. 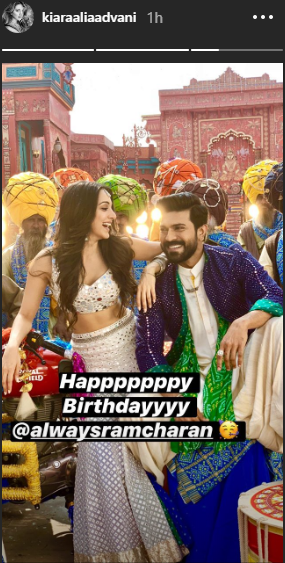 She will be seen with Akshay Kumar in ‘Laxmmi Bomb’, the remake of Kanchana. She has also completed work on Nikhil Advani’s production venture, ‘Indoo Ki Jawaani’ with Aditya Seal. A few days ago, she was working on ‘Bhool Bhulaiyya 2’ with Kartik Aaryan. ‘Shershaah’ with Sidharth Malhotra is also in the pipeline. This makes her one of the busiest actresses in B-town.

The entire Bollywood has come to standstill amid Coronavirus Pandemic. Shoots, events and trailer launch events were cancelled and celebs are currently staying indoors as a precaution from the novel virus.

Watch: Ajay Devgn thanks all for the adorable birthday wishes; requests everyone to ‘stay home’ | Hindi Movie News

Sana Saeed’s father passed away on Janta Curfew day, while she was stuck in US | Hindi Movie News

Malaika Arora on her divorce with Arbaaz Khan: Even the night before I got divorced, my family asked me ‘Are you sure?’ | Hindi Movie News