As one of the highest achievements of Latvia with high export potential to China, cancer virotherapy was mentioned during the “16+1 Summit” held in Riga last week.

Chinese Premier Li Keqiang addressed the Sixth China and Central and Eastern European (CEE) Countries Economic and Trade Forum in Riga. Latvia has been entrusted with the organisation of key events in cooperation between Central and Eastern European countries and China – the “16+1 Summit” and related side events – a business forum, a national coordinators’ meeting, a seminar of think tanks – as well as the first 16+1 Transport Ministers’ meeting. 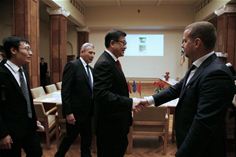 Cancer virotherapy is a cancer treatment using a virus that finds and destroys malignant cells in the human body. This kind of cancer treatment, also called oncolytic virotherapy, is evidence based and recognised as safe and effective therapy. A study published by Melanoma research suggests that a significant number of melanoma patients would benefit from prolonging the survival with oncolytic virotherapy treatment, moreover this can be achieved without serious side effects.