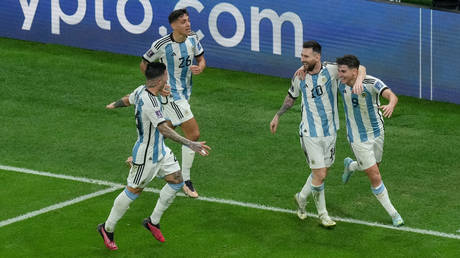 Lionel Messi helped put Argentina within touching distance of World Cup glory after his penalty goal and two strikes from young forward Julian Alvarez secured a comprehensive win against Croatia in their semifinal in Qatar.

Messi, 35, will have one last shot at leading his country to football’s biggest prize in Sunday’s final, where Argentina will face either France or Morocco.

Messi again displayed flashes of his brilliant best in a 3-0 win against Croatia – not least a dazzling assist for Argentina’s third goal of the night, which was finished by Alvarez in the 69th minute at a raucous Lusail Stadium.

The first half had seen Messi score from the penalty spot in the 34th minute after the livewire Alvarez was brought down by Croatian goalkeeper Dominik Livakovic.

The strike moved Messi to 11 World Cup goals for his country – taking him ahead of the great Gabriel Batistuta on the all-time Argentina list.

Alvarez, 22, then got himself on the scoresheet in the 39th minute with an extraordinary run from inside his own half which was capped by a poked finish beyond Livakovic.

Beaten finalists in Russia four years ago, Croatia and their talisman Luka Modric – appearing at his final World Cup – will perhaps feel that the scoreline was harsh on them after playing their part in an engaging game.

But ultimately, Messi and Alvarez were the difference-makers for a clinical Argentina – a team who had begun their campaign in Qatar with a stunning defeat to Saudi Arabia.

That now seems like a lifetime ago as Lionel Scaloni’s men will return to the Lusail Stadium for Sunday’s showpiece, where they await the winners of Wednesday’s semifinal between defending champions France and African sensations Morocco.

What had started promisingly enough for Croatia ended in a definitive defeat that was settled by moments of cold incision from their opponents.

The Croatians seemed to be settling themselves into the game with their tidy, talented midfield imposing themselves while Argentina raided more sporadically.

But a double blow from Argentina with two goals in the space of five first-half minutes changed all of that.

First, Alvarez chased down a long ball, nudging the ball past the oncoming Livakovic before crashing into the Croatian goalkeeper and going down.

A penalty hero against Japan and Brazil, this time the Croatian goalkeeper stood no chance as Messi hammered his spot kick into the top corner.

The emphatic strike was Messi’s third from the spot in Qatar, excluding shootouts, and his fifth goal in total – drawing him level with Kylian Mbappe in the Golden Boot race.

More broadly, it moved him onto 11 World Cup goals in his career, breaking his tie with Batistuta at the top of the Argentine charts, in what was Messi’s 25th match at the tournament – a joint all-time record alongside German great Lothar Matthaus which Messi is now set to break in Sunday’s final.

After a Croatian corner broke down, Messi fed the ball to Alvarez inside his own half. The Manchester City striker raced forwards until he found himself all the way inside the opposition box.

He enjoyed the benefit of two fortunate ricochets off desperate Croatian defenders, but finished sublimely by poking the ball beyond Livakovic – immediately being embraced by Messi.

Croatia are no strangers to falling behind in World Cup knockout games, but they seemed shell-shocked and a two-goal deficit almost became three when Livakovic was forced to save smartly from an Alexis Mac Allister header at a corner.

Messi caused concern by clutching at his hamstring with an apparent injury, but was still seen tracking back to tidy up defensively in first-half stoppage time, typifying the effort the Argentines continued to put in – perhaps mindful of the two-nil lead they had taken over the Dutch in the quarterfinals before allowing their rivals back into the contest.

Croatia desperately needed a foothold in the match, but Argentina began the second half brimming with confidence as Messi drew a save at the near post from Livakovic with a left-footed volley.

Argentina scrambled away from inside their box after Croatian defender Dejan Lovren could have done better with a headed effort from a free-kick.

But Argentina were content to slow the tempo, breaking up the Croatian attacks and striding forward on the counter.

When the third goal came, it was through Messi breaking down the right flank.

He toyed with the unfortunate Josko Gvardiol, turning him inside out before cutting the ball back for Alvarez to sweep in from close range.

Gvardiol, 20, has been among the defenders of the tournament in Qatar, but he endured the fate that Messi has inflicted on so many others down the years, leaving them with twisted blood in his wake.

Croatia enjoyed plenty of possession as they pressed for at least a consolation goal, but it was not to be for them despite another impressive World Cup run in which they claimed the scalp of Brazil in the quarterfinals.

Zlatko Dalic’s team will at least have the consolation of the bronze medal match against either France or Morocco at the Khalifa International Stadium on Saturday.

For Argentina, plenty of the narrative heading into Qatar surrounded Messi and his last chance at emulating the great Diego Maradona by leading his country to World Cup glory – just as his fellow number 10 did for the second of his nation’s two titles in 1986.

Messi missed out in Brazil in 2014, but will have a second shot at writing a fairy-tale script on Sunday, in what will be the sixth appearance for Argentina in a World Cup final in their history.