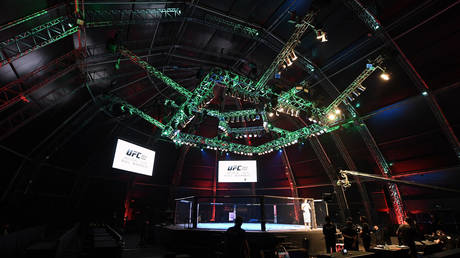 The UFC, the elite promotion in the world of mixed martial arts, has been rocked by what is being considered by some as the biggest scandal that the organization has been confronted with in its more than quarter-century history.

But what exactly is going on with respected MMA coach James Krause, who has been banned from cornering UFC fighters, and why has his fighter Darrick Minner had his contract terminated amid an ongoing gambling row which could lead to some very significant consequences?

We look at the fallout from a controversy that could be set to grow and grow.

How did this all start?

While on the show, however, Krause also detailed a side project of his: MMA gambling. He revealed that he operated a Discord channel which had thousands of subscribers, and with which he doled out betting tips on a tiered basis to his followers, many of whom paid as much as $2,000 per month for his advice.

Krause even stated that he would take over the accounts of some of his subscribers and would physically make bets online on their behalf, adding that his subscribers had enjoyed significant success and that he personally made far more money in gambling than he does as one of the sport’s foremost coaches.

Who is James Krause?

Krause, 36, is a recently retired mixed martial arts fighter-turned-coach who sported a 28-8 career record when he hung up his 4oz gloves, including a 7-1 run in his final eight fights with the UFC.

Fighting primarily at lightweight and welterweight throughout his career, Krause never ascended to the top of the rankings in the UFC, but did tangle with some of the sport’s most well-regarded names such as Jorge Masvidal, Donald Cerrone and Michael Johnson throughout his career.

Lately, Krause had become more well-known for being the owner and chief instructor at Glory MMA & Fitness, which he has operated for several years, and was a regular fixture at fight cards held by the likes of the UFC, Bellator, and others as a cornerman to a host of top MMA fighters.

Several fighters have emerged from his gym to fight for the UFC, with former UFC champion (and current interim champion) Brandon Moreno and Bellator standout James Gallagher currently among those under his tutelage.

How did the UFC react to reports of fighters and coaches gambling on the outcomes of fights?

With sports gambling become regulated in more and more markets within the United States, in October the UFC issued a memo to its fighters to inform them that its athletes and anyone in their immediate orbit (such as training partners, coaches, managers, physical therapists etc.) would no longer be permitted to place wagers on the outcomes of fights held by the organization.

“We are compelled at this time to recognize in the UFC Athlete Conduct Policy certain restrictions relating to wagering by our athletes, members of their teams and certain others,” read the note, in part, issued by UFC Chief Business Officer Hunter Campbell.

It added that the steps were being taken to ensure that “athletes act in a legal, ethical, and responsible manner and avoid conduct detrimental to the integrity of the UFC organization.”

However, the UFC also stated at the time that this memo was not directly targeting anyone under its employ, but that it was simply to remind its contractors of their obligations to the company.

What happened in the now-infamous fight between Darrick Minner and Shayilan Nuerdanbieke?

This is where things get tricky. One of Krause’s fighters, Darrick Minner, was scheduled to take on Shayilan Nuerdanbieke at a UFC event in Las Vegas in early November. However, it was noted before the fight that the betting line altered drastically in the final hours before they stepped into the cage, with significant money being placed upon Nuerdanbieke to win the fight within the first round.

Once the fight commenced, Minner threw a kick with his left leg and immediately winced and clutched at his knee. He quickly kicked again with the same leg, before crumpling to the canvas where Nuerdanbieke quickly finished the fight. The entire contest took just 67 seconds.

The unusual outcome of the fight first led to suggestions that Minner was carrying a debilitating injury with him into the cage which would have undoubtedly affected his performance – with this quickly turning into speculation that bettors had been tipped off and had been told to bet on his opponent securing a quick stoppage.

The UFC quickly announced that its betting integrity partner, Don Best Sports, was to conduct an investigation into the matter, but again stressed that they had “no reason to believe either of the athletes involved in the bout, or anyone associated with their teams, behaved in an unethical or irresponsible manner.”

What steps have been taken?

The Nevada State Athletic Commission, the government regulator which oversees UFC events in Las Vegas, informed Krause on November 18 that his cornering license had been suspended and this would remain the case until a thorough investigation had been completed.

The UFC, in a departure from its previous statements, later added that Minner had been released from his contract with the UFC and that not only was Krause banned from attending or cornering at UFC events, any fighter who trains under him will be unable to continue their career with the UFC until they completely sever ties with him, effectively telling fighters that they must move gyms if they want to have a future in the UFC – at least while the investigation is underway.

“UFC has since advised Krause and the respective managers working with impacted fighters, that effective immediately, fighters who choose to continue to be coached by Krause or who continue to train in his gym, will not be permitted to participate in UFC events pending the outcome of the aforementioned government investigations,” the UFC statement said.

“Further, UFC has released Darrick Minner from the organization.”

How did gambling regulators react?

Various gambling watchdogs have also come down hard on the issue. The New Jersey Division of Gaming Enforcement informed its licensed sportsbooks that they are banned from accepting bets on any fights which may have links to Krause, while the Alcohol and Gaming Commission of Ontario (AGCO) went one step further by prohibiting UFC betting entirely “due to non-compliance with AGCO’s betting integrity requirements.”

The AGCO’s concern is that the UFC’s gambling policies do not go far enough in prohibiting fighters or coaches, etc., from using inside information to bet on events. No such restrictions were made to other mixed martial arts promotions such as Bellator or the Professional Fighters League.

This too was followed by the Alberta Gaming, Liquor and Cannabis agency (AGLC), which temporarily prohibited UFC gambling in its province, although it lifted its ban on Friday following the measures taken against Krause by both the Nevada State Athletic Commission and the UFC itself.

What are the potential implications for Krause and the UFC?

For both, the implications could be significant. On a podcast appearance this week, former fighter Josh Thomson claimed that various devices such as laptops and tablets owned by Krause had been seized by authorities – and that he could be facing significant jail time if found to have acted in violation of the RICO Act (the Racketeer Influenced and Corrupt Organizations Act).

“What people don’t realize is that there’s elements to this that are actually considered – it goes under the RICO Act. It’s racketeering… It’s like insider trading… There’s elements of fraud that are part of this,” Thomson said on his ‘Weighing In’ podcast.

“There are legal elements here that James Krause could end up in a position where he is functionally fighting for his freedom. This is not a small-time thing, this is huge.

“They’re not just taking what he said on that type of stuff, they’ve gone in and confiscated his iPads, his computers, his cell phones, his records and then if you are someone like [Darrick] Minner, they’re doing the same thing to you… It’s going to trickle down… It’s going to be a matter of time before everyone starts turning each other in. This is gonna get nasty.”

As for the UFC, this presents a legal issue unlike anything it has faced before. The continued rollout of sports gambling in the US has opened up bountiful sponsorship opportunities for the organization, with the UFC having its own betting partner whose logo is often plastered across the octagon.

If the UFC is deemed to have a fight-fixing problem, regulators could mandate that such partnerships are impossible – and this could have far-reaching implications for the UFC’s income and future growth. It could also hurt viewership figures if UFC betting remains banned in various territories, with a large portion of viewers understood to be casual fans who watch the product solely due to wagers they have made on fights.

Furthermore, if the UFC is tarred with having a problem when it comes to the integrity of its events, this could have far-reaching consequences to its brand.

All eyes will be on the outcome of the ongoing investigation into the circumstances of alleged betting irregularities in the Minner fight, as well as the watchful eye being placed upon the UFC by regulators in North America.

The UFC will likely move to distance itself further from Krause, something which will also obviously affect his fighters. Krause, for his part, has yet to comment publicly on the situation, nor has his gym.

As for Krause himself, he is faced with the crumbling of what was a burgeoning gambling empire, as well as being the chief operator of a mixed martial arts gym whose fighters are currently under a blanket ban from competing in the UFC – and he now finds himself in the unenviable position of being a gambler who can’t gamble and a coach who can’t coach.

And that might not even be close to the worst of his problems.