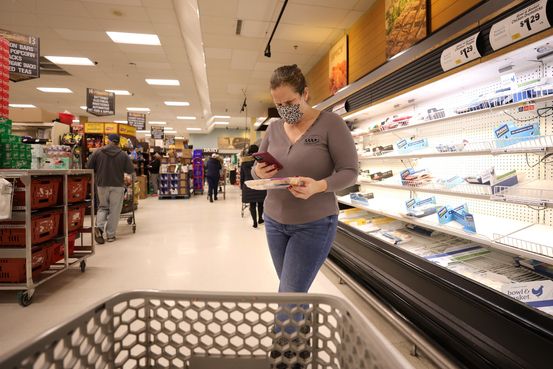 orders and revenue grew in the second quarter as consumers stuck to online grocery delivery despite rising prices and store reopenings, a promising sign for investors as the company prepares for a public offering as soon as later this year.

Instacart is one of the few companies in Silicon Valley moving toward a public listing in what might be one of the slowest years for IPOs in decades. A drop in the value of formerly highly valued technology stocks ranging from

Revenue for Instacart during the three months ended in June climbed 39% from the year-earlier period to $621 million, investors said, the highest quarterly revenue in Instacart’s history. The increase was stronger than in the first quarter, when revenue increased 15% year over year.

The San Francisco company’s growth was driven by an increase in the number of orders placed on the app, which climbed 25% from the year-earlier quarter to more than 60 million, people familiar with the matter said. The quarter also was helped by the growth of new consumer price plans including lower-cost scheduled delivery and more expensive fast delivery options, as well as lower average fulfillment costs by grouping individual orders.

While the numbers are nowhere near the growth Instacart saw during the early part of the pandemic, they still provide support for the grocery-delivery startup ahead of the planned public listing as soon as this year. Instacart also turned a profit in the second quarter, The Wall Street Journal previously reported, though the exact profit couldn’t be learned.

The grocery-delivery company’s growth outpaced that of

which said second-quarter revenue rose 30% to $1.6 billion in the period. Investors frequently compare DoorDash to Instacart since it operates a similar third-party delivery model.

DoorDash also turned a quarterly profit ahead of its IPO in late 2020. It has since swung back to a loss because of investments overseas and in new categories like grocery delivery and as employees’ stock options vested.

The timing of Instacart’s IPO isn’t set and could change depending on several factors. The company said earlier this year it had more than $1 billion in cash and marketable securities.

Instacart was among the primary beneficiaries of the pandemic lockdowns as consumers pivoted to online grocery shopping. Amid breakneck revenue growth, the company raised money at a $39 billion valuation in a March 2021 funding round, making it one of the most valuable U.S. startups.

Growth slowed dramatically in the following months as grocery stores reopened and competition from other delivery players mounted, causing the company’s share of the online grocery market to fall. Some investors cut the value of their shares amid the falling value of public tech stocks. In March, Instacart said it lowered its internal valuation to $24 billion.

In the past year, Instacart has invested in new business lines such as advertising to help sustain growth and maintain its competitive edge over rivals. Last year, Instacart bought a maker of automated shopping carts and a catering software company to help diversify the services it offered to grocery retailers. In March, Instacart said it would start building fulfillment centers for supermarkets that can deliver groceries in 15 minutes.

a former executive at

as its customers. In July, co-founder

said he would step down as executive chairman and leave the board of directors when the company goes public. Ms. Simo is expected to take over as the chairwoman of the board.

—Preetika Rana contributed to this article.

Write to Berber Jin at berber.jin@wsj.com