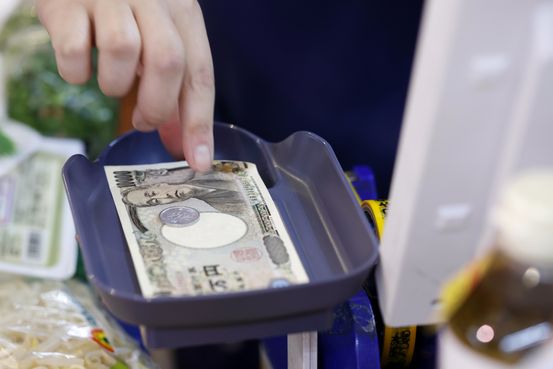 TOKYO—Japan intervened in the foreign-exchange market by buying yen for the first time in 24 years, shortly after the

accelerated a fall in the currency by confirming it would maintain ultralow interest rates.

The rare intervention was the latest example of global concern triggered by the strong dollar, which has gained ground on the back of the Federal Reserve’s interest-rate increases.

One nation hit by the fallout is Japan, the world’s third-largest economy, which has to pay more for essential imports of oil, natural gas and food. These imports are generally denominated in dollars and now are costing more in yen terms.

The dollar rose near 146 yen after Bank of Japan Gov.

hinted Thursday afternoon that interest rates in the country were likely to stay near zero for the next couple of years.

Less than an hour after Mr. Kuroda stopped talking, the government stepped in. It said it intervened in the market to sell dollars and buy yen—the first such operation since 1998.

While a strong dollar means Americans pay less for imports—a plus for the Biden administration amid high inflation—the reverse is true in the rest of the world. The strong dollar is exacerbating inflationary pressure outside the U.S., adding a risk to global growth.

The yen’s fall is sharper than most, but other major currencies are headed in the same direction. China’s currency, the yuan, this month broke 7 yuan to the dollar for the first time in more than two years, while the British pound has hit multidecade lows.

Japan’s intervention resulted in an initial success. Within minutes, the yen rose so that it took only around 141 yen to buy a dollar. Still, that is far below a level set earlier this year, when the dollar was trading at around 115 yen. As of Thursday midday Eastern Time, the yen traded at 142.37 yen to the dollar.

“‘Although foreign exchange rates in principle should be determined in the market, we cannot stand by idly when speculative and excessive moves repeatedly occur.’”

“Although foreign exchange rates in principle should be determined in the market, we cannot stand by idly when speculative and excessive moves repeatedly occur,” said Finance Minister Shunichi Suzuki, adding that the government would act again if needed. Prime Minister Fumio Kishida repeated the same language at a news conference in New York and said the yen’s volatility is the worst it has been in three decades.

Mr. Suzuki didn’t comment on the size of intervention. The vice minister of finance for international affairs, Masato Kanda, said Japan was in close communication with the U.S.

The U.S. Treasury Department said it didn’t participate in the currency intervention.

“We understand Japan’s action, which it states aims to reduce recent heightened volatility of the yen,” a Treasury spokesman said.

Some analysts questioned whether Japan could sustain intervention on its own because its foreign-currency reserves, while large, aren’t unlimited. The Finance Ministry reported $1.17 trillion in such reserves as of the end of August, much of which is believed to be in dollars. That compares with more than $6 trillion of global foreign-exchange trading a day, according to the Bank for International Settlements.

“If it’s just the Bank of Japan on its own, yes they can cap the decline, but they’re not going to be able to change the trend,” said Brad Bechtel, global head of foreign exchange at Jefferies Group. “If you really wanted to change the trend, you would get the backing of the big central banks. Then the markets would be convinced.”

The core cause of the dollar’s strength, particularly against the yen, is the interest-rate differential between the U.S. and Japan, traders have said.

On Wednesday, the Fed raised interest rates by three quarters of a percentage point and signaled additional large increases to come. A half-day later in Japan on Thursday, the central bank decided to maintain short-term interest rates at minus 0.1% and its target for the 10-year Japanese government-bond yield at around zero.

Mr. Kuroda said the bank had no plan to raise interest rates and repeated the bank’s guidance that it would maintain easy monetary policy for the time being, which he defined as two to three years. The reason, he said, was that he didn’t see Japan’s inflation—which hit 3% in August—as likely to last.

“It is almost certain that the pace of price increases will fall below 2% next fiscal year and beyond,” Mr. Kuroda said at a news conference Thursday. The next fiscal year in Japan begins in April 2023. Inflation in Japan is much milder than in the U.S., where prices have been rising at a pace exceeding 8%.

Mr. Kuroda said the yen’s recent fall is “one-sided and affected by speculative trading” but reiterated that the bank would continue monetary easing because he said the nation’s economy was still recovering from the Covid-19 pandemic.

In recent months, traders have generally brushed off statements by Japanese officials expressing concern about the yen’s fall, assuming Tokyo wasn’t ready to put its money where its mouth was. That could change now, analysts said.

Thursday’s message from the authorities was: “Don’t take us for fools,” said Michiyoshi Kato, director of fixed-income sales at Mizuho Securities.

Still, said Mitsubishi UFJ Morgan Stanley Securities strategist Naomi Muguruma, “the effects could be temporary as long as fundamental factors behind a weak yen remain, such as Japan’s trade deficit and an interest-rate gap between Japan and abroad.”

This year, policy makers have been leaning in the opposite direction: to boost the values of their currencies against the dollar, dubbed a “reverse currency war” by some on Wall Street. Policy makers in Europe and South Korea have attempted to verbally defend their currencies in recent weeks, while China has tried to shore up the yuan with policy changes.

Japan’s intervention came on the 37th anniversary of the Plaza Accord, a 1985 agreement among the world’s largest economies to weaken the value of the U.S. dollar. At that time, the dollar’s blistering rally against its major trading partners was causing global dislocations. The intervention worked, and the dollar’s value plunged.

But it also came with unintended consequences. Japan’s currency, the yen, rose sharply, hurting the competitiveness of its manufacturers. Exports suffered, followed by a series of policy decisions that fueled a massive asset bubble and ultimately resulted in Japan’s “lost decades” of economic stagnation.

Write to Megumi Fujikawa at megumi.fujikawa@wsj.com and Chelsey Dulaney at Chelsey.Dulaney@wsj.com FedEx Stock Tumbles More Than 20% After Warning on Economic Trends