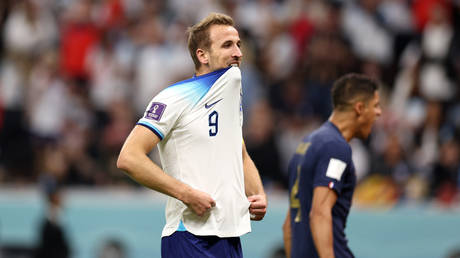 Harry Kane missed a late penalty for England as defending champions France earned a 2-1 victory to move into the World Cup semifinals in Qatar.

England captain Kane blazed his spot kick high over the bar of Tottenham teammate Hugo Lloris’ goal in the 84th minute of the match at the Al Bayt Stadium, spurning a chance to equalize.

Aurelien Tchouameni had given France the lead in the 17th minute with a superb strike from long range, before Kane canceled that out from the penalty spot ten minutes into the second half.

All-time French top scorer Olivier Giroud put his team in front again with a header in the 78th minute.

But there was time for more drama as Kane was unable to convert his second spot kick of the night, awarded after Theo Hernandez had barged into the back of England substitute Mason Mount inside the box.

But Kane stepped up to fire the ball far over the bar – sending England’s World Cup hopes with it.

For England, who were semifinalists in Russia in 2018 under Gareth Southgate and beaten finalists at Euro 2020, it was more heartache as their 56-year wait for a major trophy continues.

France ended up getting the job done on a night when they were far from their best.

England had largely kept the feared French frontline quiet for most of the match – including World Cup Golden Boot leader Kylian Mbappe, who uncharacteristically failed to spark into life.

But Les Bleus can call on the experience of their all-time top scorer Giroud – the 36-year-old who has spent a large chunk of his club career in the English capital at Arsenal and Chelsea.

It was Giroud who pounced for his 53rd goal for France by beating Harry Maguire to head in Antoine Griezmann’s whipped cross with just over 10 minutes to play of the second half.

Kane is so often England’s own go-to man, and had confidently lashed in his first penalty of the night in the 54th minute following a foul in the French box by Tchouameni on Bukayo Saka.

That strike meant Kane equaled Wayne Rooney’s all-time record of 53 goals for the Three Lions – but the milestone will ultimately feel a hollow one as Kane’s late penalty failure cost England a path back into the match.

The semifinal line-ups for Qatar are now complete, with Argentina taking on Croatia on Tuesday at the Lusail Stadium, before France return to the Al Bayt Stadium to meet Morocco one day later.

Two-time winners France are aiming to follow their success in Russia four years ago and become the first team to retain the World Cup since Brazil in 1962.

Even if not at their best on Saturday, the French proved that they have the toolset to find a way – making them an ominous prospect for their remaining rivals in Qatar.