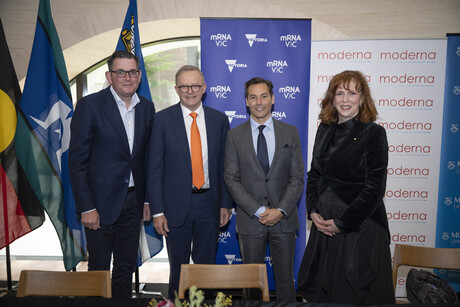 Moderna has announced Monash University as the home of its mRNA vaccine manufacturing facility in Australia. The company’s facility, which is expected to produce up to 100 million mRNA respiratory vaccine doses annually, will be located at the university’s campus in Clayton.

“Our facility at Monash University will enable the establishment of a world-leading mRNA manufacturing facility in the region,” said Michael Azrak, Moderna’s General Manager Australia and New Zealand. “We look forward to being a part of the Monash Clayton precinct and contributing to the R&D ecosystem in Melbourne and across Australia.”

The announcement follows the agreement of a strategic partnership in March 2022 between Moderna and the Australian Federal Government to establish a domestic mRNA vaccine manufacturing facility.

When constructed, the facility is expected to provide Australians with direct access to a portfolio of mRNA vaccines against respiratory viruses and to be activated on an urgent basis to support Australia with direct access to rapid pandemic response capabilities. As part of this partnership with the federal government, Moderna will also support Australia’s mRNA research, development and industry ecosystem, including establishing a Regional Research Centre for respiratory medicines and tropical diseases.

With construction set to start before the end of the year, Moderna’s manufacturing plant in Melbourne is expected to be operational by the end of 2024, subject to regulatory approvals.

Victorian Premier Daniel Andrews said, “This agreement means that Victoria will be home to Moderna’s only mRNA manufacturing and finishing centre in the Southern Hemisphere.

“The pandemic has shown us how important it is to have strong sovereign capacity — we’re not wasting a second in making sure we have access to the vaccines we need to keep Victorians safe.”

Vice-Chancellor and President of Monash University Margaret Gardner AC said the announcement is recognition of the collaborative work between Australian and Victorian Governments, medical research institutions and industry partners like Moderna to develop vaccines and treatments for a range of global health challenges. Iodine: What Foods Have It and Why You Need It The role of specialty pharmacists and collaboration in improving outcomes