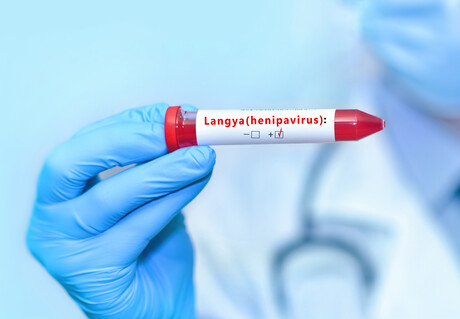 A newly identified virus, the Langya henipavirus (LayV), has now infected 35 people in China. The virus is thought to have come from animals and causes fever, fatigue and a cough. So far, there is no indication that the virus is spreading from person to person.

Dr Xiang Liu, who is a postdoctoral research fellow at Griffith University, said LayV is closely related to Hendra virus and the Nipah virus, which are endemic to Southeast Asia.

Though the estimated fatality rate of Nipah virus is at 40% to 75%, no death has so far been associated with LayV infection, Liu said. “As Hendra virus and Nipah virus are both zoonotic viruses transmitted through bats and rodents, the LayV was thought to be transmitted from animals to humans.

“Shrews have been suggested to be the natural reservoir for LayV. Notably, shrews are widely distributed in eastern and northeast China, some of which live in close proximity to humans.”

Sanjaya Senanayake, a specialist in infectious diseases and Associate Professor of Medicine at The Australian National University said the shrew may be the natural reservoir of LayV but some domestic animals were found to be infected too.

“Regarding this infection, it is still early days but there are some reassuring signs, namely that there haven’t been deaths or many serious illnesses from it, that there don’t seem to have been many cases (the earliest case seems to have been 2018) and that person-to person-transmission hasn’t been found (unlike Monkeypox and COVID-19),” Senanayake said.

The LayV patients were mainly from Shandong and Henan provinces in eastern China, said Liu. “Based on the 35 clinical patients, no clear evidence has been found for human-to-human transmission, although ongoing monitoring is suggested as the transmission pattern of the virus could be altered by adaptive mutations.”

Senanayake said the announcement of another new infection is not surprising. “Over the last five decades, there have been around 50 new infections described. The vast majority, like LayV, Monkeypox and COVID-19, are viruses that have jumped from the animal to the human world.

“The reason to be vigilant about this virus though is that it is a henipavirus, which comes from the same family as Hendra and Nipah, both of which have caused deaths in humans. Nipah has also been associated with person-to-person transmission.”

Dr Nick Fountain-Jones, who is a Research Associate at the University of Tasmania, said the latest findings show how incredibly important viral surveillance is. “This group of viruses pose a constant and real threat to humans and livestock, and viruses like LayV need to be monitored carefully. Early detection, identification of potential reservoir hosts and contact tracing as was done in this study are crucial steps to prevent the next pandemic.

“Unfortunately, just because we are still experiencing the SARS-CoV-2 pandemic does not mean another isn’t around the corner. More funding for research, surveillance and projects such as the global virome project are crucial for helping prevent future pandemics.”