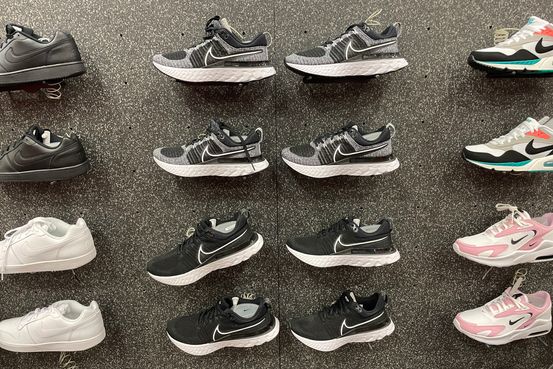 has said it didn’t have enough inventory to meet consumer demand for the past two years. Now, it has too much—and the sneaker giant needs to step up discounts to clear out items.

The company on Thursday said inventories rose 44% to $9.7 billion in the latest quarter, and higher discounts and freight costs squeezed profit margins. Executives said they would mark down more goods, especially apparel, heading into the holidays.

Shares of Nike tumbled about 10% in late trading following its quarterly report.

The results are the latest sign of how rapidly retailers and manufacturers of everything from fertilizer to furniture have found themselves with a surplus of goods, after two years where they scrambled to have enough to sell during the pandemic.

said during a call Thursday to discuss the latest results.

Mr. Friend said Nike had started increasing discounts during the summer months and that inventory in North America had peaked during the quarter. For the fall quarter, the company will work aggressively to liquidate excess goods and plans to tighten the amount of product it buys, he said.

Mr. Friend said most of the inventory pile-up is apparel that arrived late for each of the seasons in previous quarters in North America. Inventory levels would start to normalize during the fall quarter but some liquidation is expected in the winter quarter, he said.

For the quarter ended Aug. 31, Nike reported revenue of $12.7 billion, up 4% compared with a year earlier. Earnings fell 22% to $1.5 billion—but the results were largely in line with analysts’ expectations.

Executives said they are betting on strong consumer demand and expect revenue in the fall quarter to rise more than 10% despite currency swings. Gross margins will continue to decline as the company discounts more products; and it will have higher markdowns in its own stores and apps than through its wholesale partners, executives said.

In June, Nike forecast that sales would increase by a low single-digit percentage this fiscal year, when setting aside currency fluctuations. On that basis, sales rose 10% in the August quarter.

“It really all depends on the consumer environment and how much they spend, as we get further into the holiday season,” said Telsey Advisory Group analyst

The Beaverton, Ore., company has said it would work with its wholesale partners to discount merchandise to help clear excess inventory. Retailers like

which all carry Nike merchandise, said recently that they have received long-awaited inventory from vendors but also noted stiff competition on price in the marketplace.

who now serves as executive chairman of Foot Locker, said last month that the footwear industry has returned to 2019 levels, in terms of how many products were being discounted. Nike accounted for 70% of Foot Locker’s merchandise purchases in 2021, and the retailer has said no one vendor would account for more than 60% of total purchases in the future.

said this month that for two years people haven’t needed to be motivated by promotions, amid fears that products would be in short supply, especially closer to the holidays.

“People are starting to get back into the place where they’re used to seeing the shelves full,” Academy Chief Merchandising Officer

said on an earnings conference call with analysts.

More discounting is also expected in China, which accounts for roughly 17% of Nike’s annual revenue, to clear some of the seasonal products that arrived late because they were in transit for too long.

Covid lockdowns and factory closures in China have hurt Nike operations in the country, where about 30% of its footwear and 20% of its apparel is manufactured, according to the company’s annual report.

On Thursday, Nike reported sales in China decreased 16% in the August quarter. The company said sales rose by more than 10% in North America, Europe and Asia Pacific.

In early August, executives at

said the company would have to take back close to $400 million of product from its retailers in China and that it expected discounts to be particularly pronounced in the region. Here’s What a $2 Million Retirement Looks Like in America