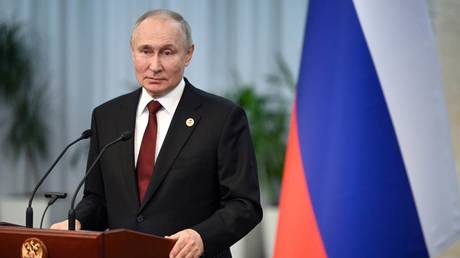 Russian President Vladimir Putin spoke with reporters after the Eurasian Economic Union summit in the Kyrgyz capital of Bishkek on Friday. Among the topics he addressed were the latest revelations from former German chancellor Angela Merkel, the military operation in Ukraine, the threat of nuclear war, the high-profile prisoner swap with the US, and Russian relations with the EU and Africa.

Putin found German chancellor Angela Merkel’s confession – that the purpose of the Minsk agreements was to “buy time” for Ukraine – surprising and disappointing, but said it only means the decision to launch the special military operation was correct. “Their point was only to load up Ukraine with weapons and prepare it for hostilities. We see that. Honestly, we may have realized that too late, and maybe should have started all this sooner,” Putin said.

While he knew that Ukraine did not intend to implement the deal, “I thought other participants in that process were honest. Turns out they too were deceiving us,” said the Russian president.

How to negotiate with “trust at zero”

The deception about Minsk now raises a “question of trust,” said Putin, noting that it is currently “almost at zero.” The real question now is whether negotiations about anything with anyone are even possible, and what would guarantee any eventual deal, he added. “In the end, there will have to be talks. We are ready for them, I have said that many times. But it does make us think, who we’re dealing with.”

What he meant by Ukraine “taking a long time”

Asked about his earlier statement that the military operation might be a “long process,” Putin explained that he was actually referring to the resolution of the conflict in Ukraine. “The special military operation is proceeding apace, everything is stable, there are no questions or problems with it today,” he said. Resolving the whole situation will “probably not be easy and will take some time, but one way or another, all participants in this process will have to agree with the realities that are taking shape on the ground.”

On launching a nuclear first strike

The US has long had a doctrine of a “disarming” attack against command and control systems, for which they developed cruise missiles the Soviet Union lacked, Putin said. Now Russia has hypersonic missiles that are “more modern and even more effective,” so “perhaps we should think about adopting the developments and ideas of our American partners when it comes to ensuring security.”

While the US doctrine envisions a pre-emptive nuclear strike, Russia’s doctrine is about retaliation, Putin explained. If the Russian early warning system detects a missile attack, “hundreds of our missiles will fly and it will be impossible to stop them.” While some attacking missiles will strike Russia, “nothing will remain of the enemy,” and that is how nuclear deterrence works, he explained.

Russia does not consider the success of talks to trade Brittney Griner for Viktor Bout as an opening to discuss other subjects with the US. While the negotiations “created a certain atmosphere,”no other issues were brought up within their framework, Putin said.

He added that contacts between Russian and US security services “continue, and in fact never stopped,” but that this specific trade was initiated by US President Joe Biden.

“Are other exchanges possible? Yes, everything is possible. This is the result of negotiations and the search for compromise. In this case, a compromise was found,” the Russian president said.

On the need for another mobilization

There are “no considerations” of another call-up, Putin said when asked if more Russians will need to take up arms in 2023. Of the 300,000 that were called up, some 150,000 have been deployed, but only 77,000 in the fighting units, while others are engaged in other duties at the moment. The remaining 150,000 troops are not yet deployed, but undergoing additional training, he explained.

“Half of those called up are a battle reserve, so why would anyone talk of an additional call-up?” Putin concluded.

Responding to the claim by EU foreign policy chief Josep Borrell that many Africans perhaps don’t know where Donbass is or who Putin may be, the Russian president said that the continent knows all too well who helped their liberation from European colonialism.

EU politicians should “stop talking about their love for the African peoples and start helping these countries,” Putin said. “If the people you spoke about knew where Africa was and what condition the peoples of Africa were in, they would not interfere with the supply of Russian food and fertilizers to the African continent, on which the harvest in African countries ultimately depends and the salvation of hundreds of thousands of people in Africa from starvation.”