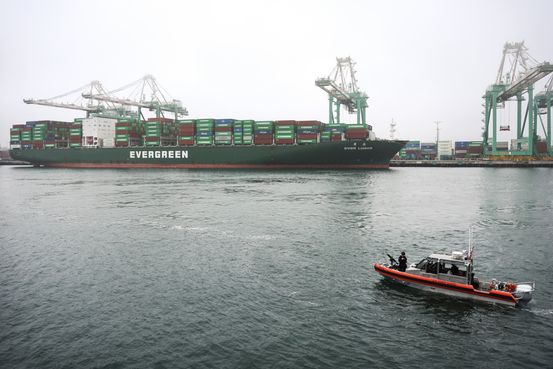 The U.S. reported a sharp narrowing in the July trade deficit due to weaker demand for imports, a positive sign for short-term economic growth but a potential warning sign for the global economy.

What Are Voters Thinking? Behind the Numbers with WSJ Pollsters

We check in with WSJ pollsters Tony Fabrizio, a Republican, and John Anzalone, a Democrat, on what a new Wall Street Journal poll reveals about which issues are weighing most heavily on voters. Join the conversation at 2 p.m. ET on Sept. 7

The trade gap in goods and services shrank by 12.6% in July from the prior month to a seasonally adjusted $70.65 billion, the Commerce Department said Wednesday.

“Trade is going to help growth in the third quarter,” said

chief U.S. economist at Maria Fiorini Ramirez Inc. However he added that declining imports due to cooling U.S. demand are “not a good sign for global economic activity, and that looks to be on the cards as we go into the latter part of the year.”

Exports grew 0.2% to $259.29 billion in July from the prior month, helped largely by higher shipments of capital goods like computers and industrial machinery. Spending by foreign visitors, which is counted as a services export, also picked up as Covid travel restrictions eased and more vacationers came to the U.S.

The drop in imports and rise in exports in July came despite a strong dollar, which makes imports cheaper for U.S. consumers while lifting the cost of U.S. goods abroad, which can hurt exporters.

Still, economists expect a slowing global economy will hinder trade flows in the near future. Recent surveys have pointed to a sharp slowdown in global economic growth as higher prices weaken consumer demand and the war in Ukraine scrambles supply chains.

The export boom that has powered China’s economy through the pandemic decelerated in August, reflecting the impact from rising inflation and slowing growth elsewhere in the world.

Although the U.S. trade deficit has narrowed in recent months, it remains wide by historical comparison, reflecting the strength of the U.S. economy compared with other major economies. Before the pandemic, the trade deficit hovered for years between $40 billion and $50 billion a month.

What’s your outlook on global trade? Join the conversation below.

Write to Harriet Torry at harriet.torry@wsj.com