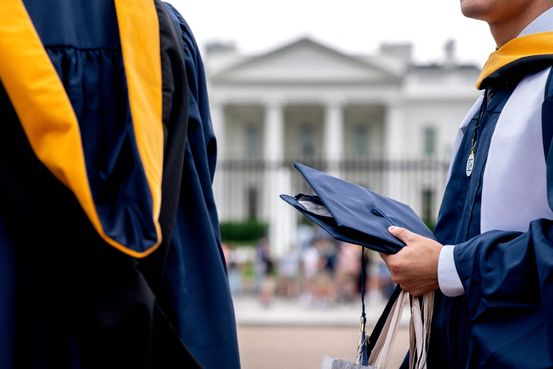 White House officials are planning for President Biden to make an announcement on Wednesday about his proposal for dealing with student-loan debt, according to people familiar with the matter.

The White House has kept the details of the decision closely guarded. Only a small group of Mr. Biden’s top aides have been informed of his plans, some of the people said.

Mr. Biden is scheduled to return to the White House on Wednesday from Delaware, where he is on vacation with his family. The president has said he would announce a decision on student loans by Aug. 31.

The White House didn’t immediately respond to a request for comment.

A move to forgive $10,000 in student debt under certain income thresholds would fall short of progressive Democratic demands for full student-debt cancellation or for canceling $50,000 per borrower, but it could apply to the majority of the 40 million people who hold a total of $1.6 trillion in student-loan debt.

Republicans have opposed broad student-debt forgiveness, saying such a move would be unfair to those who have already paid off their loans or never went to college, and could worsen inflation.

A report released Tuesday from the Penn Wharton Budget Model estimated that a one-time maximum debt forgiveness of $10,000 per borrower with incomes of less than $125,000 a year would cost around $300 billion.

“Resuming student loan payments would force millions of borrowers to choose between paying their federal student loans or putting a roof over their heads, food on the table, or paying for childcare and health care,” the Democratic members wrote.

Republicans have opposed continuing the pause, arguing that it constitutes “de facto loan forgiveness.” Senior House Republicans unveiled a bill this month that would end the pause, as well as overhaul other aspects of the federal student-loan portfolio. The bill isn’t expected to go anywhere while Democrats control Congress and the White House.

The White House has left borrowers, loan servicing contractors and the Education Department itself in limbo as Mr. Biden mulled whether to extend the pause. Last month, the administration told loan servicers to refrain from sending out billing notices or other communications related to restarting payments.

Loan servicers are contracted by the federal government to manage student loan payments. They communicate with borrowers about how much they owe, where and how to send payments, and answer questions borrowers have about repayment programs. Typically, they send out billing notices at least 30 days prior to payments starting up, so that borrowers can plan ahead.

On Monday, a group of loan servicers urged the administration to come to a decision, and said that any move this close to the deadline raised the chances of “incidents of borrower miscommunication,” according to a letter seen by The Wall Street Journal.

“You should be aware that any announcement at this late date, less than ten days before the scheduled resumption of September 1, risks operational disruptions,” wrote Scott Buchanan, the head of the Student Loan Servicing Alliance, an industry group.

Write to Andrew Restuccia at andrew.restuccia@wsj.com, Gabriel T. Rubin at gabriel.rubin@wsj.com and Tarini Parti at Tarini.Parti@wsj.com