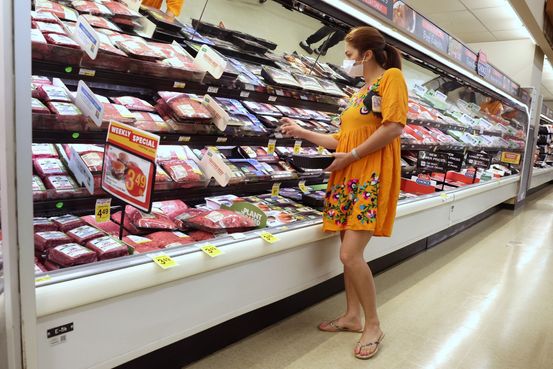 Beef is getting cheaper, bringing some economic relief to U.S. consumers.

Prices of beef, typically among the costliest grocery store purchases, are falling after more than a year of increases, as consumer demand softens for some cuts. Supplies are improving due to better staffing at meat plants, and supermarkets are offering more discounts on rib-eye, New York strip and other often-expensive products.

For months, prices for food and consumer products have been rising across grocery aisles due to higher costs of transportation, ingredients and labor. Some of the biggest increases have been in the meat section, and shoppers have been buying cheaper cuts or switching to less expensive protein like chicken. As beef prices plateau, consumers are finding more deals and options, industry executives and analysts said.

In July, the pace of U.S. inflation eased slightly from a four-decade high as gasoline costs fell from June levels, along with declines in prices for used cars and airline fares. Grocery prices were up 1.3% in July compared with June, according to Labor Department data, and the cost of eating out at restaurants also increased.

Prices for rib-eye and beef loin are down nearly 10% for the four weeks ended Aug. 7 compared with a year ago, while brisket decreased about 18%. Ground beef prices—among the cheapest beef products and still in high demand—increased about 7% over the period, compared with a roughly 20% increase in January.

“The cost of all the stuff is piling up and it’s starting to hit people’s pocketbooks,” said Carey Otwell, director of meat and seafood at Mitchell Grocery Corp.

The Alabama-based grocer is selling less premium meat such as grass-fed beef. People continue to buy lower-priced cuts like ground beef, holding up prices for those products. Mitchell’s average cost of a case of beef declined about 13% over the past 12 weeks compared with the same period a year ago.

Howard Radziminsky, a retiree who lives in Scottsdale, Ariz., said he recently bought rib-eye for $5.97 a pound and New York strip steaks for $4.77 a pound. Mr. Radziminsky, who follows a protein-heavy diet and eats red meat five to six days a week, said he hadn’t seen rib-eye sell for under $6 a pound in a while.

“Promotional prices have come back to where they were two years ago,” he said. “I always eat red meat. I’m happy.”

Since the start of the pandemic, meatpacking companies such as

JBS USA Holdings Inc., National Beef Packing Co. and Cargill Inc. have said they couldn’t process as many cattle as usual because their plants were short-staffed. That constrained supplies, they said, and pushed prices higher while demand stayed hot.

Arkansas-based Tyson Foods, the biggest U.S. meat processor by sales, said the company’s own average sales price for beef was 1.2% lower over the three months ended July 2, as customers opted for cheaper cuts. The wholesale price of boxed beef shipped from meatpackers as of Aug. 13 is down about 15% from a year ago, according to the Agriculture Department.

Some of the bottlenecks at processing plants that drove prices up over the past two years have eased, improving the U.S. beef supply, said Katelyn McCullock, senior agricultural economist at the Livestock Marketing Information Center.

“We’re getting healthier from a labor perspective,” said Shane Miller, head of Tyson’s beef and pork unit, adding that higher wages and a variety of new benefits programs have helped staffing. “We’re running more volume to our plants.”

A tight labor market and higher employee turnover and absenteeism rates than before the pandemic at meat plants are expected to keep processing capacity limited in the industry, said executives and industry analysts. Boxed beef prices remain roughly 30% above their five-year average, according to the USDA.

More cattle are being directed to processing plants as ranchers shrink the size of their herds because of persistent drought conditions in parts of the U.S., helping to improve the supply of beef in stores.

Prices for some beef cuts may not stay down for long as the cattle supply tightens. U.S. beef production is expected to decline later in 2023, constraining the supply of cattle and ultimately raising the price of beef, according to USDA and agriculture executives.

said on a call with analysts this month that he expects the company to pay more for cattle going into 2023 and even 2024 as supply tightens.

Write to Jaewon Kang at jaewon.kang@wsj.com and Patrick Thomas at Patrick.Thomas@wsj.com